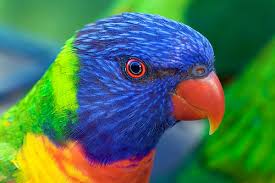 Yesterday I was getting some washing in, when I heard a flutter and tweeting noise.  I looked up to see an Australian Lorikeet about 8 inches above my head, perched on the washing line - and it promptly shat on me.  It went down my t-shirt onto my arm (and I had just got out of the shower, too).

Now, this is either the 9th or 10th time I have been shat on (by a bird..no not that type of bird UK peeps) in my near 30 years of Life.  Talking to others, this is well above average.  Birds seem to like to shite on me for some reason (??). Did one of my Irish ancestors copulate with a Leprechaun?  I wonder why it is considered lucky, seems like an odd thing to come about.

Lorikeets are an odd and magnificent creature, if you really look at them (instead of just mentally label 'Lorikeet - I know what that is')! Such vibrant colours and tweakerish character.  The other morning I was up early with my daughter and she made a shrieking sound (one of her new skills); I went to check out what it was, and it was a Lorikeet upsidedown on the washing line - I thought 'Fair enough thing to shriek about, actually', as it was quite an interesting sight.

P.s the spell check on Blogger does not recognize 'shite' as a word!  What a load of shite!
Posted by Unknown at 8:49 AM